For I know the plans I have for you, declares the Lord, plans to prosper you and not to harm you, plans to give you hope and a future (Jeremiah 29:11). 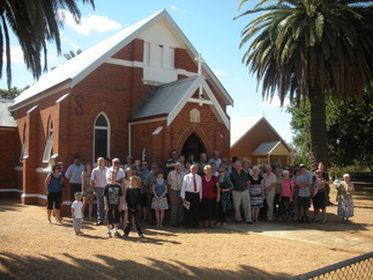 The township of Gerogery is centred around the hotel, public hall and general store, with some of the surrounding area subdivided into smaller or 'lifestyle' blocks. St Peter’s Church is situated approximately six kilometres away, in an area known as Gerogery West or 'Old Gerogery', as this was the area first settled in the 1860s. The town moved to its present site some years later after the railway line was built.

The present hall was built in 1997, and it is a great facility for both church and community get-togethers. The hall is a meeting spot for the community, used by the local fire brigade and other community groups for meetings and functions. It can also be hired for private functions at reasonable rates. The congregation is very much a family affair, with foundation families still worshipping there today.

When you visit St Peter’s you can’t help but feel welcome. The people are friendly and always waiting to share a cup of tea or coffee with visitors.

Please contact us if you have any questions or if we can help you in any way.

The area around Gerogery was settled in 1867 by German Lutheran families who travelled by wagon train from South Australia and Victoria to settle in the Riverina. They came following the promise of good cheap farmland. In 1861, the Robertson Land Act of NSW offered settlers the opportunity to select up to 320 acres for £1 per acre with a three-year term to pay.

Faith was a central part of the lives of these pioneers, and although the exact date of when St Peter’s Congregation was established is unknown, records show that it was in existence as early as 1867. Worship began in private homes until a building could be constructed.

Founding members of the church, as far as we know, were: Samuel Quast, Irmler, C. Mangelsdorf, G. Hensel, Hering, M. Klose, Heppner and possibly August Friedrich. Early members, if not founders, were: E. Lehmann, Lemke, Christian & Johann Salzke and Schulz Bros. Many of these families are buried in this cemetery, and descendants of some of these families are still members today.

In 1868, a parish was formed with Jindera and Wodonga, with Pastor J.F. Goessling as the pastor. This made Pastor Goessling the first pastor to the New South Wales District.

The congregation also saw to the Christian education of the children and established a school. Rooms were added at the back of the church building: one room as a classroom and several rooms for accommodation for the teacher. Pastor Goessling began as the first teacher, and the school was maintained by a succession of four teachers: Mr H. Auhl, Mr L. Paul, Mr H. Brauer and Mr A. Klein, until the school closed in 1884 when the Gerogery Public school was built. There were 6 German families with 39 pupils who promised to support the public school because the teacher was willing to teach German on Saturdays.

St Peter’s Tennis Club entered the Hume Tennis Association in 1933 and soon after won a premiership in B Grade. The St Peter’s tennis courts were regarded as the best in the association, with their hard clay surface, resulting in many A Grade finals being played there!

St Peter's has been part of the community, helping to support and bring the community together. The congregation has been worshipping continuously from 1867 and celebrated 150 years in 2017.